©2022 Clausen Farm. All rights reserved.
June 17, 2021 A Night of Stand-up Comedy with Michele Balan
Share this with your world
TwitterFacebookPinterestGoogle Plus 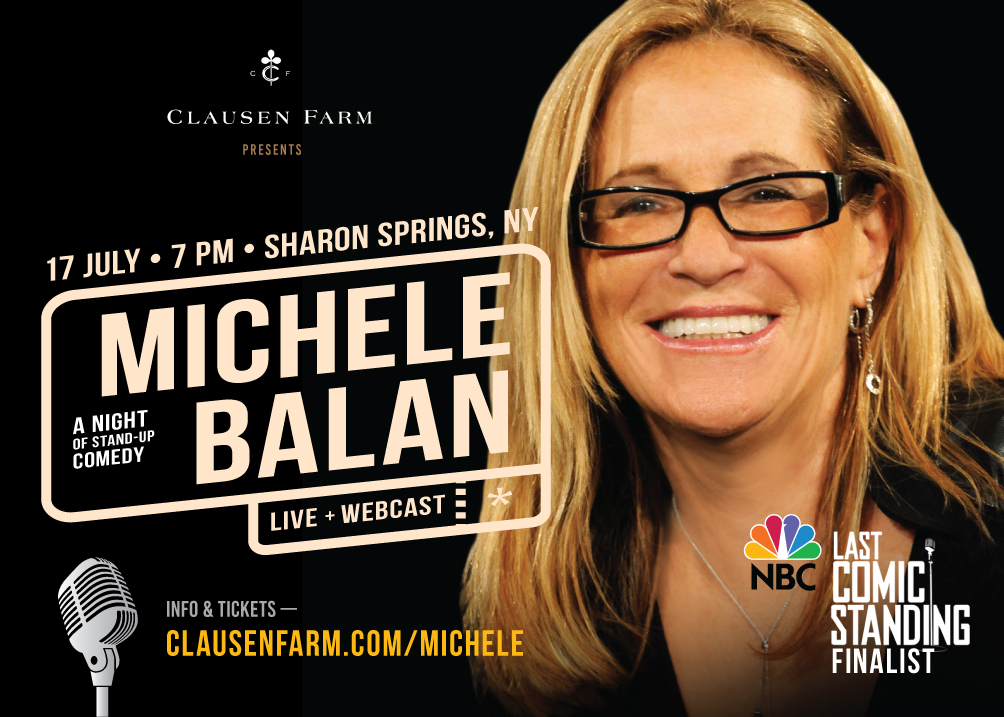 “This is comedy, this is what it’s all about!”
Jason Alexander

“As part of the Nantucket Comedy Festival, Balan had the full house in stitches.”
Nantucket Mirror

“Michele Balan is on a roll, there is no stopping her!”
The Friars Club

“Michele is her own walking sitcom!”
Nell Carter

Join us for a night of comedy with the very funny Michele Balan!

Attend in person or watch the livestream

Where the heck is Sharon Springs?

After leaving a high-paying executive position at a computer company, Balan honed her comedy skills making the rounds at local New York comedy clubs. Using her quick wit and savvy sense of humor she soon found herself in performing regularly at Carolines on Broadway, Gotham Comedy Club, Broadway Comedy Club and The Comic Strip Live.

Los Angeles soon came calling, Michele headed out west where she recorded her first CD “Neurotic by Nature” at the Hollywood Improv. On that CD, Michele wrote a song parody, “I’m everything I am, because you left me”! The amazingly funny and vocal power house Nell Carter sang with Michele (well, fortunately, sang over Michele). Michele may be re-releasing “Neurotic by Nature”. So keep an eye out.

As Michele’s popularity grew so did the press. The New York Post’s Cindy Adams declared Michele “Dynamite”. Voted one of the “Top 10 Comics” by Backstage Magazine. The San Francisco Bay Times also placed her on their national Top 10 and Broadway World honored Michele at number two in their Top 10 List of cabaret performers.

Michele headlines across the country at comedy clubs, corporate events, JCC’s, country clubs and is a popular act for major cruise lines. Balan went on to appear on The Joy Behar Show on HLN, Byron Allen’s Comics Unleashed, and the OUTlaugh festival on LOGO, the Montreal “Just for Laughs” festival, and “Gotham Live”.

One of her biggest thrills, was being one of the top 5 finalists on NBC’s Last Comic Standing 4!