©2022 Clausen Farm. All rights reserved.
August 4, 2021 Julian Fleisher in Concert
Share this with your world
TwitterFacebookPinterestGoogle Plus 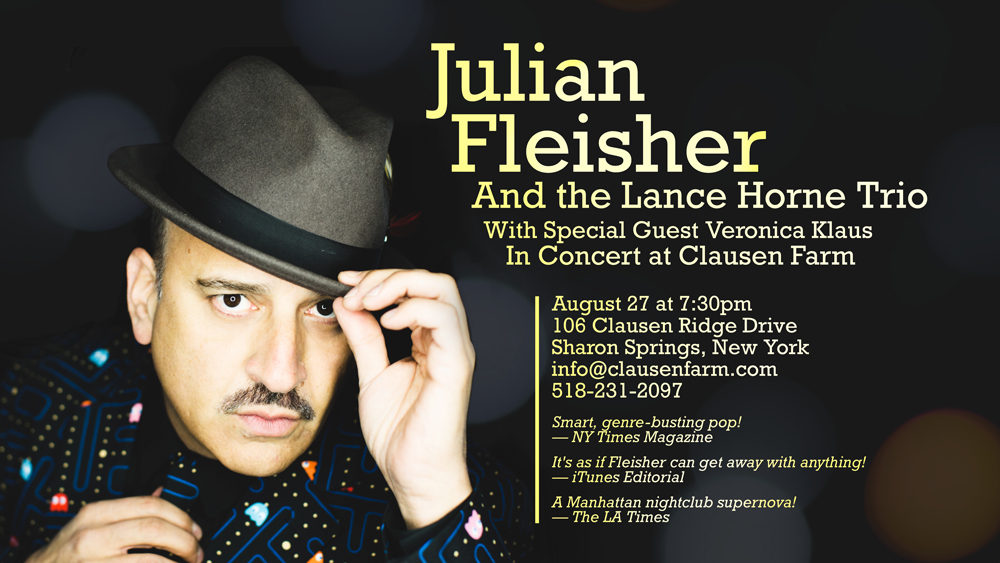 Julian Fleisher — the son of world-renowned concert pianist Leon Fleisher — has been preaching the power of the popular song to international audiences for years, not only as a celebrated singer and arranger, but also as a producer, songwriter and host of such shows at WNYC’s The Naked American Songbook and the 92nd St Y’s Why Songs Matter. Fully steeped in the tradition of such legendary songsters as Sammy Davis, Jr., Mel Tormé and Ella Fitzgerald, Julian was among the first in his class to mix contemporary tunes with the classics — believing that Joni, Stevie and Prince deserve a place in the pantheon just as exalted as Ellington, Porter and Gershwin. The results are roof-raising concerts in which old songs seem new, new songs seem timeless and original material seems right at home. Julian’s well-known wit, style and relaxed rapport with his audience will be in full effect as he and The Lance Horne Trio treat the Clausen Farm audience to an evening of fresh arrangements of familiar tunes as well as familiar arrangements of freshly minted material. This is what Summer nights were meant for.